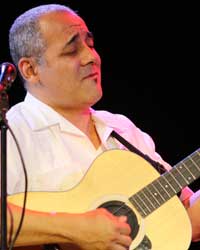 × Friday, October 25, 7:30pm Students – $10 | Seniors – $18 | VCA Members – $16 | General – $20 in advance, $25 at the door | Premium (first 2 rows) – $30 Son cubano is one of the most popular musical styles in Cuba and Kiki Valera is one of its foremost exponents. Over the last century this style of traditional Cuban music contributed to many other genres including jazz, cha cha cha, mambo, salsa, songo and timba. Cuban son is the music that made the Buena Vista Social Club worldwide stars in the late 1990s but Kiki Valera comes from a family of musicians whose involvement with Cuban son pre-dates the Buena Vista Social Club by decades. Kiki Valera is the oldest son of the famous La Familia Valera Miranda septet, a multi-generational traditional music group from Santiago de Cuba. Since the 19th century, La Familia Valera Miranda has played a significant role in Cuban culture by collecting and preserving the deep-rooted traditions of the legendary Sierra Maestra mountain region. Their debut album, released in 1982, helped initiate the explosion of interest in traditional Cuban music. Kiki, like most of his family, is a virtuoso. A multi-instrumentalist, composer, arranger, sound engineer and producer, he’s best known as one of the world’s greatest players of the Cuban cuatro, a mid-size guitar with 8 strings grouped in sets of 2. Kiki picked up the Cuban tres under the guidance of his father Felix when he was a child. He later attended one of the most prestigious music schools in Cuba, the Conservatorio Esteban Salas in Santiago de Cuba, and by age 15 was touring internationally. During his years as an electronic engineering student, Kiki co-founded the group Septeto Turquino. In the early 90s, he played cuatro and keyboards in the popular orchestra Los Karachi. By the mid-90s, Kiki was busy recording and touring with La Familia Valera Miranda across Europe and the rest of the world. Kiki continues to direct and perform internationally. He also performs and teaches in Seattle, Washington where he contributes to the vibrant music scene in the Pacific Northwest. His current project features internationally acclaimed recording artists Coco Freeman (former lead singer of Adalberto Alvarez y Su Son and NG La Banda), Leider Chapotín & Steve Mostovoy (on trumpets), Yanill Nario (on bass) & Pedro Vargas (ex-bongocero of Barbarito Torres band of Buena Vista Social Club fame). With over fifty events across the Seattle area, the Earshot Jazz Festival features a dynamic array of resident, national, and international artists. Respected for celebrating the art form’s leading edges and cultural heritage, the festival brings jazz greats from around the world into creative collaboration with area audiences and artists. Vashon Center for the Arts is proud to host three concerts as part of the 2019 festival,: LaVon Hardinson on 10/4, Joel Ross on 10/18, and Kiki Valera on 10/25. The VCA performances are generously sponsored by Flintworks.